This creamy, rich and vibrantly flavored lemon mascarpone ice cream features a dramatically contrasting swirl of sweet tart currant puree. It has a lovely texture thanks to the heavy cream and smooth mascarpone. Lemon zest provides a bit of tooth and a citrus kick that balances the creaminess of the dairy. The currant swirl creates a visual drama that begs you to present the container at the table for scooping. It deserves to be shown off.

It was late July when I put this recipe together: the peak of summer, the berries still dripping from the branches and sweat from our brows. I wanted something cold and creamy, yet refreshing. Something that would incorporate the opalescent pink champagne currants without veiling their beautiful color or tart flavor.

THE HISTORY OF CURRANT PRODUCTION

I was lucky to have two friends share the fruity abundance of their currant bushes with me this year. I had never seen them at the grocery store, which struck me as odd given how much fruit a single bush can produce. A bit of research soon led me to understand that currants were banned as a crop in the US in the early 1900s as they were thought to carry a fungus that threatened the timber industry. The federal ban was removed in 1966, but the prohibition still stands in a handful of states, particularly on the east coast. Fruit growers and advocates are now working to reinstate the commercial production of currants. You can read more of the history here.

To make the puree, I put a few cups of currants into a pot with a bit of sugar over low heat. To maximize the juice from the fruit, I smashed it all vigorously with a potato masher and cooked it down to a jammy consistency. I then passed it all through a fine mesh strainer to remove all the currant seeds; there were an impressive amount of them left behind. Stubborn persistence will pay off when pushing the puree through the sieve. The resulting jewel toned puree was so good that I found myself eating it straight from the spoon.

The girls ate this ice cream two nights in a row and declared it one of their favorites. For the next few weeks they asked for it again and again, even though we’d long since eaten the last scoops and scraped the ice cream bowls clean. 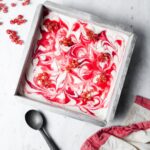 If you liked this Lemon Mascarpone Ice Cream with Currant Swirl, you might also enjoy: 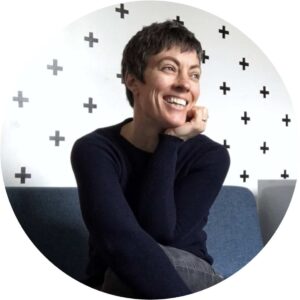 The Floured Table is a record of special recipes, made with love and shared with friends and family. Time and food both may be fleeting, but the words and recipes recorded here have permanence. They are a catalog of times well spent and a dictionary of the love language of food.