Infinitely variable and endlessly delicious. Brown sugar cake + an easy compote of whatever fruit you have on hand (or even jam!) + creme fraiche buttercream = a lovely cake that you can customize to what's available locally, in season, and makes your palate sing. Here I've sandwiched the golden cake layers with a rhubarb compote, because I first made this in May when the teetering pile of rhubarb in my fridge threatened to tumble out every time I opened the door.

Now that I suddenly and somewhat shockingly find myself in mid-July, I'm already dreaming about a new rendition filled with a summery peach compote. And if time is short or you can't bear the oven and the stovetop in the heat, a pot of jam could easily take the place of the compote. Perhaps blackberry, or strawberry. See? Endlessly adaptable. Brown sugar and the tang of creme fraiche are truly excellent companions for most fruits. And now I've just thought of figs... 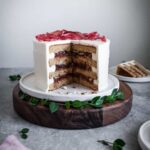 Print Recipe Pin Recipe
I adapted the cake layers in this recipe from Erin McDowell's Vanilla Strawberry Mousse cake in her wonderful book The Fearless Baker. I've made several of Erin's cakes and they have come out exactly as described - some of the best layer cakes I've baked to date. The Fearless Baker is an invaluable addition to any baker's collection and has something for every palate and skill level. My aunt gave me a copy for the holidays and I'm happy to already have smudge marks on the pages of the recipes I've tried.
AuthorKathleen Culver
Servings1 6" cake with four layers

If you liked this Brown Sugar Cake with Rhubarb Compote and Creme Fraiche Buttercream, you might also enjoy:

Made this recipe? Please leave a comment and a star review! ★★★★★ Cancel reply

Hi! I'm Kathleen. I'm the baker, food photographer and chief mess maker behind The Floured Table. I love to share my passion for beautiful, delicious tasting desserts by developing recipes you can confidently recreate at home.