Creamy and honey sweetened, this honey blackberry mascarpone ice cream features a dark and jammy blackberry swirl that tastes like the last sunny-gold days of summer. Two full cups of freshly picked blackberries are cooked down into a puree that is cooled and folded into a churned Philadelphia-style honey mascarpone ice cream. The vibrant color is completely natural - I created this beautiful purple with no artificial food coloring whatsoever.

A few years ago, prior to starting my blog, I made an ice cream from David Leite's site. It was this blackberry ice cream made with creme fraiche. I went a bit over the top and made my own creme fraiche, which meant dedicating 48 hours to the process as it sat on my countertop and percolated. The end result was completely worth it - both the creme fraiche itself, and the ice cream it became a part of.

This time around, I wanted to make something similar but with a pared down process. I settled on an eggless Philadelphia style ice cream base that uses a combination of heavy cream and whole milk. Having just purchased a 5 pound tub of mascarpone cheese on a whim, I thought I'd work on a combination of blackberry and mascarpone, with honey as sweetener. The mascarpone provided a rich and creamy texture that made up for the lack of a custard base.

In order to capture the flavor and color of the blackberries, I reduced two full cups of freshly picked berries into a jammy, concentrated sauce. After passing it through a fine mesh sieve, I had a wonderfully dark and fruity puree. It smelled just like ripe fruit on the vine. The vibrant purple color that it imparted to the honey mascarpone base was an added bonus. Isn't it striking?

FALL IS ON ITS WAY

I had originally aimed to get this recipe up sooner, given the short season blackberries have, and the impending avalanche of fall-based food content coming our way. But when I sat down to work on this post late this past Saturday evening, a massive thunder and lightning storm interrupted me. It caused thousands of lightning strikes all over western Washington state in the span of a few hours. It was the biggest and most dramatic electrical storm I've ever witnessed. My husband and I both shut off our computers and spent over an hour watching out the windows as lightning flashed outside and the thunder rumbled through, shaking the house as it boomed. Surprisingly, neither of the girls woke up. The dog, however, was a mess.

Since then, we've had much cooler temperatures and sporadic rain most days. The weather app on my phone shows a stretch of rain showers for the foreseeable future. Fall has arrived, with a flash and a boom, in the Pacific Northwest. So wherever you are, if you're still enjoying those languid, warm summer days...grab a bowl and find yourself a blackberry bush. Pick two cups, and eat the rest with sticky fingers. Make this ice cream before the last of summer slips from your grasp.

CORN SYRUP - The small amount of corn syrup in the blackberry puree is there to help keep it from turning icy and hard when frozen. Corn syrup is classified as an invert sugar, which means it is less likely to crystallize. You can certainly omit it if you'd prefer, but the final consistency might be altered from what you see here.

MASCARPONE - After making several desserts with mascarpone, I've found that mixing mascarpone is a sensitive business. It's very high in butterfat and you can easily overmix it, resulting in a grainy or curdled texture. To avoid this, keep mascarpone cold and combine with other ingredients that are similar temperatures. In this case, leave the mascarpone in the fridge until you need it. Don't bring it to room temperature first. Keep the heavy cream and milk in the fridge until you are ready to add them. When combining them, be gentle and patient. Frenzied whisking might negatively affect the texture of the mascarpone. If this does occur, rest assured it won't affect the taste of the final product and you can still proceed.

FOLDING IN THE BLACKBERRY PUREE - In contrast to the delicate swirl from my recent lemon mascarpone ice cream with currant puree, you incorporate the blackberry puree here by folding the entire amount into the already churned honey mascarpone base. I transferred the just-churned ice cream to a large mixing bowl and poured the entire container of blackberry puree on top. Using a spatula, I gently folded the mixture several times until I had partially incorporated the puree, but small areas of white honey mascarpone remained. I'd say you want to mix it until the purple puree appears approximately 60-75% blended. Pouring it into the loaf pan (or other freezer safe container) will further mix the two together. 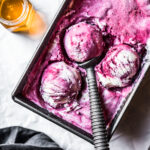 Made this recipe? Please leave a comment and a star review! ★★★★★

If you liked this honey blackberry mascarpone ice cream, you might also enjoy:

Made this recipe? Please leave a comment and a star review! ★★★★★ Cancel reply

Hi! I'm Kathleen. I'm the baker, food photographer and chief mess maker behind The Floured Table. I love to share my passion for beautiful, delicious tasting desserts by developing recipes you can confidently recreate at home.